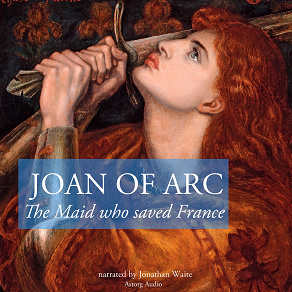 The Story of Joan of Arc, the Maid Who Saved France

by J. M. Gardner
Joan of Arc is one of the most astounding heroins in French history. Her achievements leave anyone who knows her story shaking his head in amazed wonder. A small peasant girl born in Domrémy, she said she was visited by the Archangel Michael, Saint Margaret and Saint Catherine, who instructed her to support the King Charles VII to recover France from English domination. It was the end of the Hundred Years' war, and the French army was miserable, almost defeated, and hopeless; but the young maiden obeyed the voice that spoke to her and took arms, eventually leading a galvanized army to astounding victories. She was later caught by a coalition allied with the English; the ensuing story of her trial and eventual execution at the stake is one of the most distressing episodes of history, with lies and manipulation forcing a political agenda against all evidence. This lively and precise audiobook will take you through this most fascinating story, from saintly visions to the politics of irrationality and conspiracy.