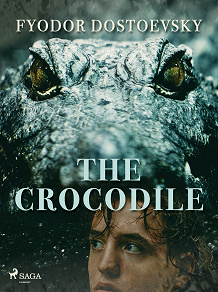 by Fyodor Dostoevsky
Ivan Matveich was thinking it was a bad idea to see a live crocodile on the street as it swallowed him whole! Why couldn't it have eaten his wife Elena instead?<br><br>What follows is an immensely humorous and satirical account of Ivan's new life from inside the crocodile, unable to get out because the owner refuses to kill the beast. <br><br>A precursor to Kafka’s 'Metamorphosis', Dostoevsky’s short story is a farcical depiction and social criticism of Russian society at the time. The situation becomes a scene from the theatre of the absurd, making the tale a poignant finger wagging at the problems of humanity.<br><br>Fyodor Dostoevsky (1821-1881) was a famous Russian writer of novels, short stories, and essays. A connoisseur of the troubled human psyche and the relationships between the individuals, Dostoevsky’s oeuvre covers a large area of subjects: politics, religion, social issues, philosophy, and the uncharted realms of the psychological. <br><br>There have been at least 30 film and TV adaptations of Fyodor Dostoyevsky’s 1866 novel 'Crime and Punishment' with probably the most popular being the British BBC TV series starring John Simm as Raskolnikov and Ian McDiarmid as Porfiry Petrovich.<br>'The Idiot' has also been adapted for films and TV, as has 'Demons' and 'The Brothers Karamazov'.