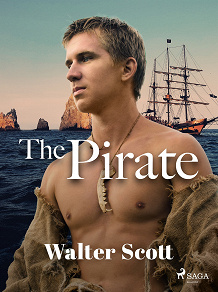 by Walter Scott
‘The Pirate’ is a thrilling adventure novel by Walter Scott. The story takes place on the edge of civilisation in the remote Shetland Isles during the 17th Century as a mysterious man washes up on their secluded shores. The mystery man is rescued by the lovelorn Mordaunt, but they soon become rivals as they vie for the attention of two sisters. It is later revealed that the enigmatic stranger is a pirate captain, and violence ensues as the sisters are taken hostage and Mordaunt must rescue them. ‘The Pirate’ features some of Scott’s finest romantic prose as he vividly depicts the isolation and beauty of the islands north of the Scottish Mainland. There are some gothic elements to the tale as the heroes are aided in their quest to defeat the pirates by the mystical Norna whose poetic dialogue was celebrated at the time of the book’s release. Although this is a historical novel the theme of changing culture and fear of societal shifts remains timely. ‘The Pirate’ is a riveting novel teeming with adventure, danger, and romance that is recommended for fans of historical fiction or adventure stories such as ‘The Pirates of the Caribbean’.<br><br>Walter Scott (1771 – 1832) was a Scottish writer, poet, and historian. Fascinated by traditional storytelling, during the 1790s Scott dedicated himself to researching and collecting ballads and published the epic collection ‘Minstrelsy of the Scottish Border’ in 1802. A prominent poet, Scott also wrote and published a range of poems, including the popular ‘The Lady of the Lake.’ His first historical novel ‘Waverley’ was published in 1814, whereupon it was an immediate success, receiving critical acclaim and selling out many printings. His best-known work ‘Ivanhoe’ followed in 1820. Scott died in 1832 at the age of 61. He was commemorated after his death with monuments in Edinburgh, Glasgow, and New York due to his impact on western literature. His literary works influenced and inspired many other great authors such as Virginia Woolf. Internationally renowned, Scott’s literary legacy continues to be felt all over the world to this day.